It is very interesting to me how some people want to argue about such things as who is the greatest trombonist (or greatest anything) in the world. I used to do it myself when I was very young. It usually comes from a very biased position about what is great and what isn't as great, as it pertains to an individual's likes and dislikes.

So, let's have a bit of a contemplation: Take a moment and think of all the trombonists in the world... right, you cannot because you do not know all of them presently or in the past. How could anyone? So, in fact, you will never know.

Now, of the ones you have heard presently or in the past, who would be the GREATEST? And I mean THE GREATEST. You might have a favorite but is that the criteria for determining who is the greatest? I personally cannot think of just one. There are many great players today and many from yesteryear.

You would think that the GREATEST player would be able to do all styles better than anyone else. Does anyone fit that criteria? I certainly do not know of any. I know there are many great trombonists who are trying to play in many different styles to broaden their artistic and technical horizons. I believe in the saying of a great wise man,"It's not what you do, it's the reason why you do it." So, if learning as many musical styles and learning to play all the instruments in the trombone family or other instruments gives you greater fulfillment, then keep on! To thyself be true.

I have heard real essence come out of players who, by most 'professional' musicians' standards, would not ever qualify as fine players. But guess what? The essence doesn't mind! Isn't that a liberating insight, and relief?! After years and years (my whole playing life of 43 years) of listening and wondering about what is the essential ingredient in the magic of music, I have found it to be genuineness... and in that realm, where the player is playing from that genine place in themselves, the essence of the music doesn't mind or care whether the person is the greatest craftsman on their instrument or the worst. I have witnessed this many times alone and in the presence of many others.

I have seen people with a lot of creativity form attitudes of low self worth because they didn't think they were 'good' enough at a technical level. Yes, it is true that certain types of expression need a very developed skill and craftsmanship to work through. But many, many do not. This is the valuable lesson (the most important musical lesson I ever received) that I learned from my first four teachers. I am, and forever will be, grateful for that gift.

We have all had essence moments. Real genuine moments that were beyond any intellectually contrived workings out. I will admit that, for a while, it was difficult for me to hear players that just went for technical mastery. I am happy that at an early age I realized how to appreciate what somebody has to offer at any level. This insight has helped me to listen to players more openly. Whether I personally warm to the playing or not is another issue and not the point here.

A good first approach to broaden ones depth of appreciation is to listen to the qualities of a player from three levels:

Another set of three would be at the level of art:

These last three are skills that take a lot of time to practice and develop. But it is worth it! :-) Because it can always grow and refine just like Art itself.

Of course, there are numerous ways to listen to players and music. One of the most important ways is to let yourself feel what the music does to you. How does it make your body feel? What is the nature of your mental state after hearing music? What did it do to your emotions? How open where you when you listened to it? The list goes on and on and on......

"It is, where it is," is a phrase that my wife, Carol, and I have come to. That, in my mind, is the criteria. Where is the music the greatest? 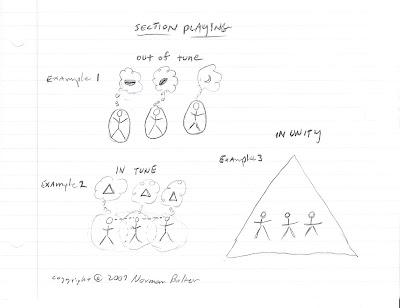 Here is one of my views about section and ensemble playing. Sometimes simple diagrams can say a lot.
Posted by Norman Bolter at 3:58 PM 1 comment:

Singing in the Car

In the name of fun and freedom and spontaneous expression, the following little tune happened in the car. I was stopped in a lot of traffic and went to call Carol on my cell phone. I pressed some side button and, on the screen, this microphone appeared! And it said, "Press OK to Start Recording"! So, I pressed it and started singing into this mic and it went on for quite a while! Then the tune naturally ended. So, I stopped recording and on the screen it said, "Press Send." So, I sent it--to Carol!

If you can't be free to express yourself while you're alone, where can you express it? Now, I didn't really think that this would go public. :-) This is the raw, uncut version! But I do this kind of thing sometimes in my studio, in the shower, outside (in seclusion!) or in the car--and this one is caught on tape!

The value of this is the freedom of not being caught up in how "good" it sounds, like how's the rhythm, pitch or clarity. You just let it happen.

So, here's to your uninhibited, free time expression periods! Enjoy them!

MP3: Singing in the car
Posted by Norman Bolter at 7:19 PM No comments:

More from "The TAC Legend Writings"

The following is an excerpt from a master class given by Master Manlon and his colleagues, Seymore and Joice, on "What is talent?" although the following, being well into the class, touches on an adjacent subject, namely, what is meant by "professional."

Master Manlon: "...Remember, not all of us can be virtuosi or be as accomplished as we would like on our instruments, but we still can be connected to the essence of the music and communicate that through our instruments."

Kilton: "Is it possible to be connected to the essence of the music in a professional setting?"

Kilton: "What do you mean by 'professional,' Master Manlon?"

Now, to answer your question about whether you can be connected to the essence in a professional setting, the answer is, 'Yes, try, because every little bit helps.'"

The above is from my book in progress, "The TAC Legend Writings." Click here to read another excerpt and for links to previous excerpts.
Posted by Norman Bolter at 6:59 PM No comments: