Back from Eastern Trombone Workshop 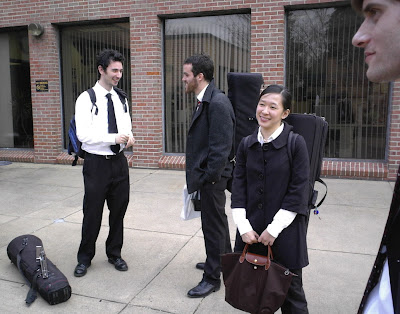 At the end of the Frequency Band concert at Eastern Trombone Workshop last Saturday, an older man from Brazil came up to us in tears, putting his arms around me, saying he will never forget this concert as long as he lives. "It was magical!" he said.

That is why Carol and I came to ETW, and why the Frequency Band came to ETW. Just in case there was one person who could be deeply touched beyond any trombonastics and feel another kind of important messages that can be expressed and transferred via music. This man got that! What joy, humility and gratitude Carol and I felt.

As it turned out, there were other people who got the 'something else' the FB has to offer. A older, experienced teacher came up to us and said, "My teaching will never be the same again." Another very, very famous trombonist said, "It was the most moving concert I have been to in a long, long time." This same person also commented on the great togetherness of the ensemble itself. He was sincerely touched. And many, many other teachers, performing professionals and students made sure to tell us how they were affected in positive ways.

Also, since then, there have been a number of students emailing us, reporting how they were inspired by our participation at ETW. A number of young players have found the new Frequency Band page on Facebook and are becoming "fans." And so, the interest continues!

I congratulate Sgt. Sam Woodhead, organizer of this event, for all his hard work in putting the whole workshop together and for having the courage and vision to invite the Frequency Band to ETW as "an alternative to the traditional trombone format." It was an incredible opportunity for all in the Frequency Band to walk the talk, to actually 'be the change we wish to see' and to put it out there with confidence, in the love that it should be so. The FB members did a fantastic job in holding true to what the FB is so "music as a living thing," in the way that we can offer that, had a chance to appear and work its wonders. Hats off to all of you!!!

For Carol and me, it has been a HUGE journey, part of which includes the release of the new Frequency Band CD called "PHOENIX" which is now available. I really have no idea how Carol managed to produce this CD in the short time she had from the start of the recording retreats, mid January, to the start of ETW last week! I know she is my wife and co-director of the Frequency Band (and MANY other things, as well) but my gratitude and appreciation for what she does ever keeps growing!

I also want to thank the US Army Band "Pershing's Own" and their commander, Col. Thomas Rotondi Jr., for their terrific playing and willingness to 'be with me in it' as we premiered "Arjuna Speaks," for trombone and wind ensemble. I am sure I will be writing more about this experience in the days to come.

For some, these experiences at ETW will seem like a dream, for others an already forgotten memory, and for others still a non-ending journey of perception, development and connection. But, no matter what the case my be, as Carol has often said, "the material remembers."
Posted by Norman Bolter at 7:02 PM 4 comments: