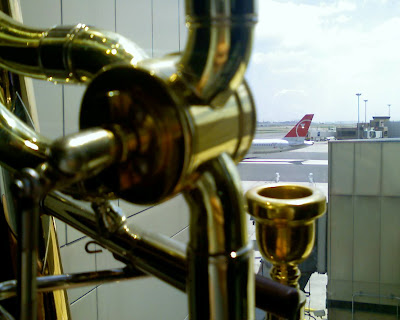 Last week I went to Minnesota again and had a terrific time playing in the orchestra, especially with Doug Wright, David Herring and tubist, Steven Campbell. The section sounds fantastic and I was happy to be a part of it.

The week was filled with interesting co-incidences, along with the more anticipated visits with family and friends. (Of course, I had a marvelous time with my wonderful siblings--sister Marcey and brother Neal, along with their spouses and my niece and two nephews.)

The week started off with my plane to Minneapolis being over three hours late in its departure. I decided to find a place in the airport to warm- up. This was a bit tricky since I did not have any practice mute with me. The good thing was that the airport was unusually quite that day. So, I found a spot and started to play. No one could really see me, but when the 'musak' stopped I think they could hear me.

People started to notice me and stayed around and listened to my warm-up. Parents brought their children over and i spontaneously started giving a mini youth concert. It was really fun! The airport staff really seemed to enjoy listening to me and said they preferred this to the piped-in music they were 'forced' to hear all day long.

Above is a photo of the window I was practicing near. I thought I would try to capture some of the experience on my cell phone camera and it surprisingly came out.

In the end, I got a good hour and a half practice session in and a few mini youth concerts. And I met a lot of very nice people that I would never have met if I did not decide to warm-up. People generally enjoy watching someone play music, even if it is a warm-up. They seem to get something from it, a bridge perhaps to communicate with another life. There are many kinds of concerts, stages and audiences. Some times they just appear....
Posted by Norman Bolter at 7:57 PM No comments: 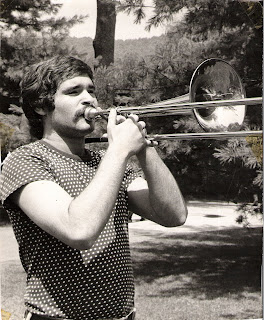 Thirty four years ago today I made my 'debut' with the Boston Pops.

Two weeks before this date, in 1974, Bill Shisler, who was a contractor for the Pops as well as one of the librarians, called me at my Brighton apartment. He introduced himself and said he would like to hire me to play first trombone in the Boston Pops for a couple of concerts. I said, "Great!" He then said the first concert, which would be in two weeks, has Ravel's "Bolero" on it. I said, "Great!"

The next day, I went over to Symphony Hall and picked up the music. There was Brahms' "Academic Overture," an English March, finale to Tchiakovsky's Fourth Symphony, then "Bolero." Plus many other pieces followed that.

Everyday until the concert date, I played through the entire concert (including counting the rests) twice. Since there was not going to be a rehearsal before the concert, I thought this was the best preparation strategy I could think of.

I actually spoke about this experience on my WGBH radio interview in November, which you can hear by going to the Audio/Video page under Resources on our website.

In reflecting on that day so many human years ago, I am thankful to the people who recommended me and gave me that opportunity. I was very young and they were taking a risk themselves to a degree by recommending me to go in 'cold' like that.

That is what I miss, not being in the symphony or Pops being able to give others a chance. That is something I feel honorable about, having given MANY people a chance to play in the orchestra. I wanted them to be able to get an education on the job, through actual experience. I only did this if I thought they were ready but did not care if they were undergrads. If I thought they were ready, I tried to give them the opportunity.

I would like to think that I give others the chance to better discover themselves through the process of developing their ART, not just trombone playing. This is the big challenge, to play your ART on the stage of life and feel and sense the resonance that comes back to you no matter what 'stage' you are on. I believe this resonance has the feedback you need to keep on growing, if you have the ears and, more importantly, the passion to take it in.

I learned a lot that night on that stage, thanks to all who made it possible.
Posted by Norman Bolter at 5:07 PM 2 comments: