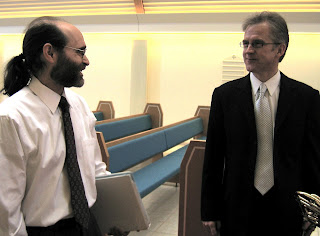 During the course of our stay in Iceland, we had four orchestra rehearsals, an orchestra concert, two master classes, three trombone choir sessions and a trombone choir concert. Quite a lot in one week!

Oddur gathered the trombone choir members and mustered concert publicity before we arrived. Once again, his amazing energy and enthusiasm was such an inspiring part of the process!

The three trombone choir "rehearsals" and the concert were conducted in Frequency Band style, with Carol and I working together with the group. And what a grouping of players it was! There was the Iceland Symphony trombone section, a very fine soloist, freelancers, band directors, jazz players, students at various levels and two very nice players on a short break from touring with Bjork (they are trombonists in Bjork's all women brass band). It was the most diverse group we ever worked with! But what was so great about it was everyone's coming together and getting into the love of music and all of the participants doing their absolute best to be in it with Carol and me, as we explored "music as a living thing." We so much enjoyed being with everyone and appreciated their openness and enthusiasm for our approach! We realize it is not necessarily easy for people to take that leap of faith, when they do not know us and our particular ways of going on, which, as many know, are not always conventional, starting with tuning! 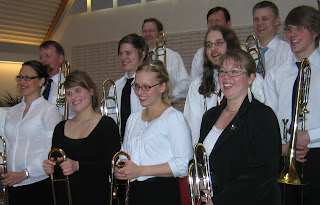 The group, in fact, despite our short time together, did extremely well and rose to the newness of the situation. All the various differences in age and experience started to fall by the wayside as we connected to the meaning of each piece. Our purpose put everyone on the same footing (and "frequency") from which we could move forward together as a group. (Here is a photo of many of the players.)

The concert consisted of eight pieces, one being a world premiere specially written in honor of the country of Iceland and my friendship with Oddur Bjornsson. The piece was titled, "In All Hearts." The group warmed to this piece in a special way. Carol even managed to get a sound clip on her digital camera during our Wednesday rehearsal on April 2nd. That session had a magic all its own.

Since the concert was done in Frequency Band style, I gave "living program notes" for each of the pieces. As was said to the audience before we premiered " In All Hearts," Carol and I have been all over the world working with groups and it is easy, when in another land other than one's own, to notice the differences. But in this piece, we wanted to express something else. We wanted to express that special something, wherever you go, that is the same, "In All Hearts." The group played the music with this sentiment. And a powerful core sentiment it is. Here is the sound clip from "In All Hearts."

The audience enjoyed the concert very much. Several people came up to us and commented how they had never been to a concert like this before and that it was "unique and very special," as one person put it.

Carol and I wish to give our heartfelt bravos and thanks to all the choir participants, their guests and all in attendance. It was a very special experience that we always will hold "In Our Hearts."
Posted by Norman Bolter at 11:00 PM