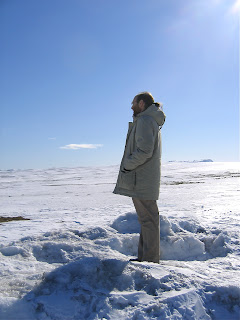 From the moment we landed and made our way to Oddur's car, it was very clear we were in very different land! During the ride from the airport, we witnessed those unique characteristics of this land that made it understandable why NASA used Iceland to test equipment for the moon landing. Oddur was like a professional tour guide telling us about so much amazing history, from where the Americans set up military base that has since become housing and serving other purposes to how the rocks we were looking at were actually cooled lava. The mountains were beautiful, adorned with snow and bold features, even though they weren't incredibly high.

The next day, which was our only free day, Oddur and his thirteen-year-old son, Baldvin, (who is an extremely talented trumpet player) took Carol and myself on a trip into the countryside. We saw steam naturally coming up from the ground, beautiful Icelandic horses which don't get much bigger than ponies, and the vast expanses of land, snow and ice--the tundra. 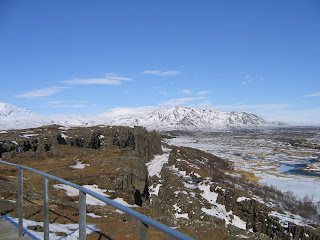 Oddur also took us to the point where the North American and Eurasian tectonic plates meet (see photo). It truly was awesome to see them. They are separating at the rate of an inch and a half a year. We could not stay outside too long because it was very cold and really windy. Carol said it was a challenge to stand steady enough to take photos with the high winds but we thoroughly enjoyed being there and did get a strong sense and impression of the land.

As we were driving, looking at the vast expanses of tundra and mountains, Oddur pointed out a house that was at the base of one mountain and surrounded by huge boulders, obviously from a landslide, and it was clear there was no guarantee that more rocks would not come down and crash into it. We all commented on how our own instincts probably would not find that a very comforting place to live! We also stopped by a shop that sold bread baked inside hot springs, the heat from the hot springs bakes the bread. This place also had a large greenhouse attached to it with huge tropical trees and plants. Oddur commented on how in winter, there is something warming about driving by this area (where there are a number of greenhouses) and seeing the glow of grow lights that keep this vegetation and much of the island's local vegetables growing when the lack of sunlight and cold weather make it impossible to grow food and other plants outdoors.

We were so thankful that Oddur and Baldvin took us to see these Icelandic wonders on what was not our own but also Oddur's only free day. We will always remember these things and yet another wonder of nature we saw our last night in Iceland. That will be a separate post!
Posted by Norman Bolter at 2:35 PM