As I said in my Iceland Trip: Arrival and Orchestra Playing post, playing in the orchestra was really interesting and enjoyable. Here's more on the orchestra experience!

The Iceland Symphony Orchestra has a lot of members from Iceland in it but also has members from the US and other countries. I could hear a mixture of different trainings which, to my ear, made for a very colorful and exciting effect.

Oddur Bjornsson did a wonderful job playing euphonium on "Don Quixote." I played second trombone to Siggi Thorbergsson, who did a beautiful job on first trombone in the Strauss. The bass trombonist, David Bobroff, played very strong throughout the whole concert, as did the tubist, Tim Buzbeee. This is not meant to be a review, just my appreciation of everyone's musicianship!

I played principal on the "Othello" overture and Oddur played second to me, which was a lot of fun personally and musically. The whole orchestra did a very fine job and the principal cellist did a superb job in "Don Quixote." I heard she attended school in Boston at the New England Conservatory. Her name is Helga Thorarinsdottir lagfiola. As it turned out, I had many different people come up to me who said they went to school in Boston, either at NEC or Boston University. 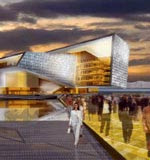 There is a new concert hall being built in Reykjavik which the musicians are really looking forward to, not only for their own performances but also because of all the other international orchestras and artists who will be coming to perform there. We saw the construction site and it looks like it will be quite a structure!

Bravo to all the members of the Iceland Symphony Orchestra on a wonderful performance and for their hospitality.
Posted by Norman Bolter at 9:18 PM