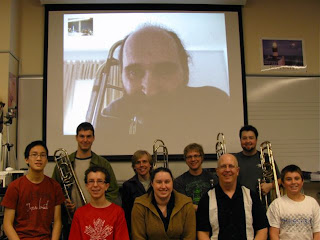 In this age of computers, the online video master class has been a reality for a while now. Six years ago, Stewart Smith, who is  a low brass teacher at the University of Manitoba in Winnipeg Canada, began 'bringing in' artists to his school via the Internet. It is a wonderful way to bring in, for the students of that school, well known teachers and performers from all over the world and to do it at a very reasonable cost! Even though it is not the same as being with people in the flesh, it certainly has good benefits. The next best thing to being there! 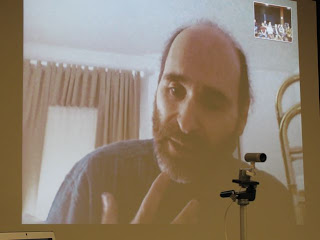 Stewart asked me this past Fall if I would be interested and I was thrilled to participate in this way. Finally, everything worked out and the master class happened on April 10th. I was in my room at my desk and before I knew it, thanks to iChat, I was talking to Stewart and he was introducing me to the audience. There was a good turn out and the age range was from 11 to 55. Teachers, students and parents all in a room with my image on a large screen. It was really a fun and unique experience. 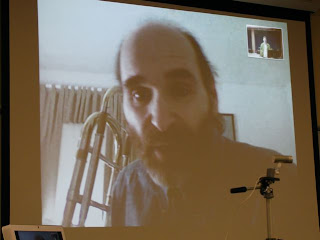 My sound system is not great but it was certainly good enough to hear basic things in the students who played and to get a sense of the audience. Stewart asked if I would play something to start so I played a piece I'm writing called "What in the world am I doing?" inspired by my wife Carol. It was great because I ended up using this phrase every now and then in the master class. The phrase was used  as a reminder to not practice without consciously being in it. When we catch ourselves 'grinding the wheels' of our minds and lips, just mindlessly going around and around, it is a great thing to ask, "What in the world am I doing?"  to bring us back to listening and being with our activity and to remind ourselves why we are doing what we are doing. 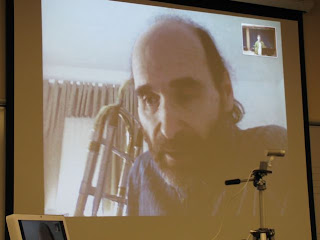 Stewart said everyone enjoyed the class. Four people played and we worked on basic concepts together. I also included the audience by inviting them to join in with some of the exercises. 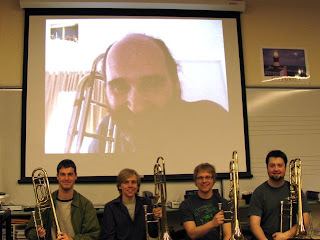 I want to thank Stewart Smith and his wife Susan for their hospitality, and the University of Manitoba for making it all possible. Plus, a big thank you to the folks that made it possible through their funding.

I am including some pictures Stewart sent me that he took from his angle. The  group shot was such a fun concept and the picture says it all.
Posted by Norman Bolter at 5:34 PM