Back from the State of Cold Air and
Warm People! (Minnesota Trip) 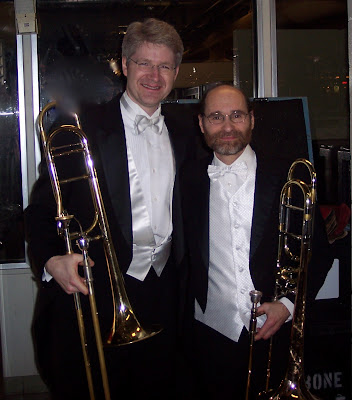 There is cold and there is cold. I am not speaking of Pluto but of my birth state of Minnesota. It was 15 to 20 degrees BELOW zero not including the wind chill that put it into the minus 35 to 40 range. But being with the trombone section, and the orchestra in general, was a very warm, human experience.

It was great to play in the trombone section. It was totally easy, in every way, and it sounded beautiful. Doug Wright and I (in photo) played together as if we had never stopped 12 years ago. Playing with Dave Herring and Steve Campbell felt the same way.

I also had a great time with my brother and sister who live in the Twin Cities. Their love and concern for my well being was so touching.

I also was fortunate to see a production put on by the "Out on a Limb" Dance Company and School. My sister, Marcey, is the vice president and her two sons, David and Jeremy Bensussan, my nephews, basically have danced their whole lives in it. They were great in the performance of "Willie Wonka and the Chocolate Factory."

It was on Valentine's Day that I went to an old favorite candy shop in Minneapolis called Candyland, where they have the best caramel popcorn I ever tasted. It brought back memories of when my mother used to take my sister, brother and me there when we were children. The only problem that day was that my valentine, Carol, was in Boston!!

I will look forward to my next trip to play with the Minnesota Orchestra in April. At that time, I hope to see my former teacher, Ronald Ricketts. He was out of town last week. Then we can take another "three' generations" photo.

I can tell you that as far as the playing aspect of your Minnesota visit was concerned, the pleasure was all ours! We very much look forward to your next visit with us. For me personally, it was inspirational in many more ways than one. Thanks again for your playing and your wisdom.