Then There Were Two 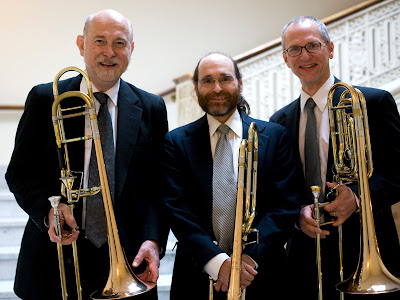 Only two more concerts of Christmas Pops and I will be finished playing with the orchestra. It is really like watching a movie, witnessing certain things for the last time. The process of leaving something that I have done for most of my life brings about an acute state of awareness of the people and the place that have been a part of my life for so many years. And when I think about it, I have spent almost more time with Ron Barron and Doug Yeo than my own family!

Speaking of Ron and Doug, I have learned a lot from both of them in our many years together. We all have strong views about music and life. We all have interests outside of music. As well, each of us has our own musical interests outside of the orchestra. From what I know, we were the only symphony section where each person has made multiple solo and ensemble CDs. As individuals, we have richly contributed to the trombone and brass world and I would say the music world in general. Both Ron and Doug are honorable, quality people. I give them both a resounding "BRAVO!" for all that they have done and will continue to do.

Above is a picture of the trombone section taken just last week by BSO principal oboist John Ferrillo. A moment in time...

In October, shortly after my leaving was announced on the Internet, I wrote a blog post with other thoughts about this process. Here is the link: Beginnings and Endings

Also, on November 23rd, WGBH radio aired an interview with me conducted by producer, Brian Bell, about my time with the Boston Symphony and Boston Pops orchestras. With WGBH's kind permission, we've posted that interview on our website Audio/Video page. Scroll down until you see the WGBH graphic. Hope you enjoy it.
Posted by Norman Bolter at 8:53 PM

After sitting for 15 minutes trying to formulate a comment to Norman's post, I realize that, once again, he has done a rare thing: he has rendered me nearly speechless. Such is the deep emotion I feel at this moment in time, facing the reality of Norman's retirement from the Boston Symphony and the end of this aspect of our over two decade long friendship. While at the end of tonight's concert, "There will be two," in a few more months "There will be one" as I am "left behind" after the retirements of both Norman and Ronald Barron. How I wish we all could have gone out together, holding hands. But as poetic as that might have been, that is not to be.

But I will say this: Over the last 22+ years, Norman and I have spent over 20,000 hours together on the job at Symphony Hall and on tour with the BSO. To say that I have been changed by that amount of time together - and add to it the many other times we have been together in recording sessions, recitals and off stage gatherings - would be a profound understatement. I have said to many people that this separation that will occur tonight at 10:00 pm when the last cut off of "White Christmas" officially catapults Norman into retirement from the BSO is very, very difficult for me. Norman, you know, with the words I cannot say, how much you have meant to me. This is not a separation like death as we are both still alive. Nor is it like a divorce because we remain good friends. But it is a separation of a kind, the end of a period of time in which we have shared so much, both musically and personally. I look forward to continued musical and other collaborations because while this is AN end, it is not THE end.

I rejoice with you in this new phase of your life as you and Carol reach toward new horizons and, as you are inclined, share some of your new explorations with us.

With thanks for all the things I cannot say but which I know you understand,

Congratulations, Norman. You have had a brilliant career and I look forward to hearing of your future exploits. My three years of study with you helped to lay the foundation of my playing, and consequently my own career as a musician. I can not thank you enough for those years. Icing on the cake was to be able to to sit next to you at Symphony Hall and Tanglewood.

Best wishes and keep in touch,